There are two types of MagnumSpike! Systems with all the same exceptional features: the original MagnumSpike! and the Ultimate MagnumSpike! Both systems come in convenient deployable lengths (10 ft, 12 ft, 16ft, and 25 ft). in both polymer hard case or ballistic nylon case (wrap & roll). All models have the same patented, non-clogging spikes that penetrate and deflate tires in predictable short distances.

In the Original MagnumSpike!, the spikes are held tightly in grommets using a synthetic sleeve. The tight retain-release, friction-fit spikes are pulled out of the system when the tire rolls over the spike thereby deflating it.

The Ultimate MagnumSpike! uses a friction-free spike release system. The spikes are secured and suspended on pins. When the vehicle tires run over the spikes, the spikes are pushed down shearing the pins which release the spikes into the tires causing deflation.

All systems are measured from the first spike to the last, i.e. usable length. Included with every UMS system is a winding reel with 45 ft.of 150 lb. test nylon cord, 50 extra spikes with shear pins, a DVD, and a 5-year,100% warranty for any components, including spikes. 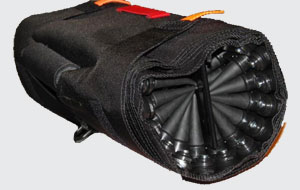 Training units with rubber tire spikes are available in the MS16 foot wrap & roll unit. Train your staff without damage to your vehicles. They can also be ordered in 10, 12 and 25 feet lengths. Call for pricing. 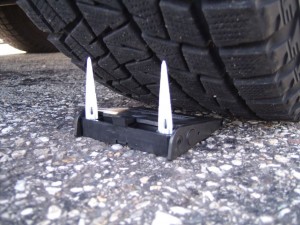 MagnumClaw!™:
Placing a MagnumClaw!™ under the tire after you’ve pulled over a vehicle will prevent high-speed chases. The 2-1/2″ patented spikes come in a collapsible folding case that is laid flat under the tire of the stationery car at a check point or in a situation where the driver of a vehicle has been stopped for questioning.

The new reinforced pocket-size MagnumClaw! with two patented tire spikes placed under a stationery vehicle’s tire deflates the tire if the vehicle moves. The tire spikes are released into the tire from the MagnumClaw!™ penetrating and deflating the tire. The driver can’t flee or initiate a high-speed chase. The MagnumClaw!™ will totally deflate tires helping Law Enforcement to contain and control what could otherwise turn into a potentially dangerous situation.